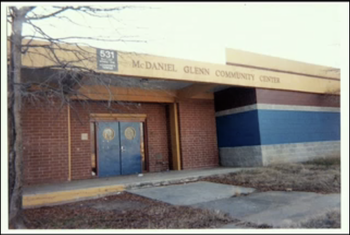 Barrett was last seen at the McDaniel-Glenn Housing Community Center paying a bill for his mother, Janie (Janice?) Glenn. This community center was where Patrick "Pat Man" Rogers danced. A neighbor reportedly saw him later, a few blocks from home in the Kirkwood-East Lake area along Memorial, getting into a 2 door white car with a black man carrying a purse.

An elementary school student claimed he was approached by someone offering him $3,000 to kill Barrett.

Aunt Marry Harris and a cousin said Wayne Williams had been at their house.
On 12 May, 1981, William Barrett's body was found by FBI agents on a curb in a wooded area on Winthrop Dr near I-20 and Glenwood, near Greencove.  A 32 year old custodian from Southwest HS, Harold Wood, had ran out of gas about a mile from the scene and was arrested and questioned.  Wood described a black man with a white over blue Cadillac standing where the body was found and staring at him before driving away.  The police said this matched the description of the man who found the body.

The cause of death was asphyxiation by strangulation.  White undercoat animal hairs were found on the body.  He was fully clothed but missing his faded blue jean jacket.  Also found on body were a East Lake Meadows Boys Club Card, 2 Willie Johnson Paint Co. cards and boy scout pocket knife.  There was a postmortem stab wound.  A phone number in his pocket was traced to a white man seen at the Omni and at the 5-Points MARTA station picking up boys.  A witness saw Barrett at this man's house one week before his disappearance, and also saw Lubie Geter there.

The state called this another "pattern case."