This is a non-comprehensive list of victims who were not on the task force's official list, but may have fit its parameters.
Source: The List by Chet Dettlinger

Since the arrest of Wayne Williams

Haynes was a white 22 year old who lived on Sells Avenue with his mother, Ruby Fornwalt.  He was last seen December 1978.

Dewey was 9 years old, white, and died April 1979 close to Moreland.  The suspect in the case, a 64 year old convicted of molesting a 13 year old girl, was also a suspect in the list cases.  The man also frequently visited the Baugus residence at 1091 Primrose Circle SE.
Donald Wayne Thomas (1251 Grant St.) was convicted earlier of killing Baugus that October and was sentenced to death.

Nicknamed "Tree Lady", Masters was a white 15 year old who lived in Sandy Springs.  She disappeared near US 278 and was found Christmas Day, 1979, riddled with bullets in an abandoned farmhouse just inside DeKalb County near the scene Jo Jo Bell was found.

Beverly lived near Grant Park where she was also found stabbed the same week as Lenair was found.

Mother Dorothy
Cynthia "Cinderella" Montgomery lived in apartment 10 at 31 Shirley Place NW with mother Eula Montgomery.  She knew Christopher Richardson and went to the same NFLPA camp at West Georgia College in Carrollton as Joseph Lee's sister and Jo Jo Bell.  Her teacher there, Tony Riddle, lived 4 doors down from Anthony Carter.  From 9-12 August 1980, she stayed at a Salvation Army Girls' Lodge near 10th and Peachtree.  Later she was seen crying at Wheat St. Baptist Church (of Rev. Earl Carroll) by some of her relatives.  Two presumed pimps of her were "Priest", aged 32-33, who drove a black Pinto and wore a cowboy hat and jeans, and "Smitty" (Montgomery had used the name "Smith" before), aged 40-41, who drove a red and white Cadillac and wore maxi-coats.  Cynthia was found stabbed to death in a Mark Inn (Mark Inn-South, 2750 Forrest Hills Dr SW 30315, Cleveland St Exit S Expwy, Best Western, Marvin Johnson, Mgr) in room 311 by a Sara Davis, on Cleveland Avenue & I-75, wearing a red dress, fur coat, and designer boots she bought with her mother.  A relative of Angela Bacon said a cabby was showing off pictures of Cynthia.  Authorities asked Eula if Cynthia had been hanging around "those gypsies."  Author Chet Dettlinger wondered if he could mean Angela Bacon or actual gypsies like Reverend Mother Dorothy at 1214 Gordon (sign in front now says Mother Jackson (404) 755-1301), or her sister, Mother Doria on GA-166.  Both addresses were listed as McMillin Co., which refurbishes boilers. 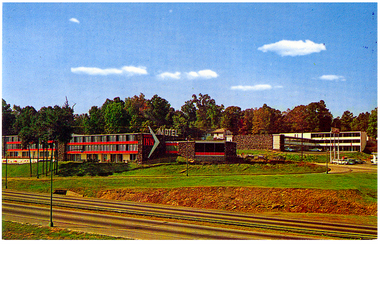 Mark Inn where Montgomery was found

Angela "Gypsy" Bacon left her grandmother's house (Isabel Porter) and stayed two days at Walter Mitchell's grandmother's house.  In the early morning of 24 August 1980, Mitchell saw a man, 60, with a black beard in a green/blue station wagon with blue interior and wood panels and a butcher knife in his sun visor and handcuffs hanging from mirror, first ask Bacon to sit in the car.  He drove and when she screamed, he stopped, she flew out, and he purposefully backed over her.  This happened on the 500 block of Georgia Ave at the intersection of Stewart Ave, across the street from where Anthony Carter was found and 2 blocks west of Cap'n Peg's.  James Charles "Old Man" Gates was charged in then cleared of her murder.  He owned two light blue Ford station wagons that matched this description.  The police only checked one of these station wagons for a butcher knife in the visor.  Sometimes John Porter lived with him.

Angela had an aunt by the name of Cleo Pitts.

Clark was a 37 year old woman found stabbed where Angela Bacon was murdered.

Lee was shot and killed in a Tenneco Station that was located near Camp Creek Pkwy and I-285 and Desert Rd in July 1980.  He also lived on Camp Creek.  His sister Anita Lee went to the same NFLPA camp at West Georgia College in Carrollton as Cynthia Montgomery.

At the intersection of Lee's death, an informant met an unnamed suspect who lived near Georgia 166 and Interstate 285 in an apartment with his common law wife (a girlfriend met this wife at a Dial Inn on Shallowford Rd).  The suspect had children working for him in corner-to-car drug deals.  Another witness said this man paid boys for sex at Grant Park.  The informant saw a boy wrapped tightly in a green blanket in the man's back seat.  A homosexual associate of the man lived in boarding houses off Bankhead Hwy (US 278) and Jackson Pkwy.  The suspect was said to use I-285 to Camp Creek to Washington Rd to Brown's Mill.

On 13 October 1980, there was an explosion in the Gate City daycare at Bowen Homes on Wilkes Circle.  At the time, the daycare was occupied by eight adults and 82 children.  A 52 year old teacher, Nell Robinson, and four three-year-olds, Kelvin Snelson, Andre Stanford, Ronald Brown, and Terrence Bradley, were killed.  Seven others were injured.  Many people believed that the children's murders were connected to this incident, and further that the KKK was involved, but official word was that a faulty boiler caused the explosion.

22 year old Yearby, from Chattanooga, was found in a wooded area at the intersection of Pickfair Avenue SW and Pickfair Way SW in January 81, tied to a tree, nude from the waist down, hands bound, and stabbed.

Curtis Walker's uncle, 21 years old, a maintenance man at East Lake Meadows who lived with Curtis  was found dead in 1981 near where Curtis was last seen.

Worked at Cap'n Peg's and lived one block away from the restaurant.  His body was found near Baltazar's house in November 1981.

After returning from Thanksgiving vacation in 1981, a Georgia Tech student found his roommate, Alexander, 18, crushed between his bed and a wall.  His room was ransacked, and only his belongings were missing.

Juanita, 32, was stabbed and killed in December 1981.  She was a one time babysitter of Yusuf Bell.

"Chuckie" Watson, using his brother Vincent's ID, was used by police as an informant, after he told them he was a homosexual who knew child molesters.  He escaped and followed his girlfriend to her home in Houston, TX.  On 5 April 1982, she found him in her apartment in a pool of blood.  Another woman friend said three men broke in, beat him and shot him in the back of the head.