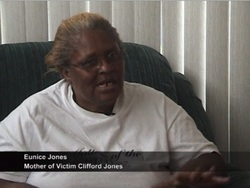 Mother
The boy and his brother, Dwayne, had taken up can collecting, and during one trip, had stumbled across a body of a murdered man.  Clifford had another brother Herman and a sister Alice.  Eunice's husband was killed in the army 14 years before.  Another brother (?), Emanuel Williams, said the last time Jones was seen was when he let Clifford go help a woman with her groceries.

Clifford Jones was last seen at St. James & Lookout Ave with a cousin looking for cans to sell. 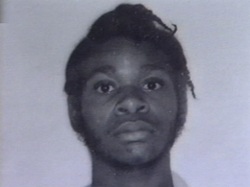 Jaime Brooks
3 youths at the laundromat at Hollywood Plaza witnessed (through the window in which a fan was in) the manager, a James "Jaime" Edward Brooks, and a man named Calvin strangle, beat and carry his body to the trash.  One witness named Freddie, 19, whom the police called "retarded", said the manager fondled and anally raped Jones before strangling him with a yellow rope.  Then he said he washed him with soap and a rag and re-clothed his body.  Two more witnesses saw a black man in a hooded robe walk from the manager's home and place a large item in plastic next to the dumpster, then make a phone call.  Police had responded to an anonymous call.

A fourth witness claimed the manager took Clifford and another man to his residence.  He saw the hooded robe in the manager's home.

The other man said he spent the night with the manager.  He had met him at the Silver Dollar Saloon in November 1980.  He also met "Nate" Cater there, and had met Michael McIntosh at the Cameo Lounge.

The manager would be sentenced on a charge in another case of aggravated assault with attempt to rape, but was released during Williams' trial.  He later died of AIDS. 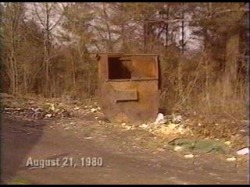 The body of Clifford Jones was found next to a dumpster by the laundromat in Hollywood Plaza Shopping Center on Hollywood Road.

Bruises and cuts on were found on his mouth.  His underwear was missing and he was wearing unfamiliar red and blue jogging shorts and white tennis shoes. The cause of death was asphyxiation by ligature strangulation.

The trilobal fibers used to convict Wayne Williams were also found on Jones' body.  Because there were five witnesses implicating another man in his death, Clifford Jones' case alone could in theory invalidate the entire case against Williams, which was built upon the fiber evidence.