Patrick Baltazar was last seen at his father's place of work, Fisherman's Cove (201 Courtland Street Northeast), getting money from him to attend the Golden Gloves boxing match or to play at the Omni.  Witnesses later reported seeing him until midnight at Galaxy Three Arcade in the Omni.

Photographs removed per request by the family. 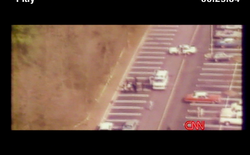 Patrick Baltazar's body was found in Corporate Square, between I-85 and Buford Hwy near Briarcliff, in an overgrown area behind the complex, between the complex and some apartments, by a maintenance man for the Corporate Square business office complex.

A dental assistant, Margaret "Patsy" Jackson, who worked in the complex, had seen a light green 68-69 Chevy Impala parked in the area with no other cars around at 7:15 that morning.  Inside the car was a white man in his late 20's with brown shoulder-length hair, a small mustache, and close-set eyes, wearing a flannel plaid shirt, who stared at her until she entered the building.

Scrapes, bruises and dog hairs found on the body.  His cause of death was asphyxiation by ligature strangulation.

The authorities considered this to be a "pattern case" in Williams' conviction.