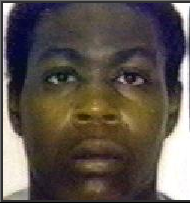 21 year old Jimmy Ray(e) Payne (5'1", 137lbs, DOB 01 Sept 1959) had been released from Alto Correctional Institute Dec 1980, where he'd been doing time for a burglary charge.  He was friends with Pat Man and hung out at Eagan Homes apartments.  Payne was under the care of a Dr. Roseman and had attempted what appeared to be suicide at least twice.   He had a cousin named Mike McGhee, 33.  His father's name was John Henry Payne.  His mother Ruby Nell Jones lived at 1840 Hillsdale Dr. in Decatur.

He was last seen at 566 Magnolia St. NW, the Vine City Terrace Apartment he shared with his sister Evelyn Payne and stepfather Ula Jones, to sell some 1951 nickles at the Omni.  He was wearing a red jogging suit and white tennis shoes.  He was supposed to meet his girlfriend Catherine Turner at the Vine City MARTA station that afternoon.

On 27 April, Fred Wyatt produced Payne's prison ID card at Cap'n Peg's.  It had been thought that Payne was trying to assume a new identity several days before he disappeared.

After being arrested for robbing a coin shop in East Point, 18 year old Jerome Young of 2937 Landrum Dr. S.W. said he saw Jimmy Raye Payne in another coin shop on E Ponce De Leon (US 278).

A man called police saying he saw Payne at a club on Peters Street S.W.
Jimmy Payne's body was found by Jesse Arnold and his wife fishing in the Chattahoochie a mile north of the Bankhead Highway bridge on the east bank near Riverview Rd, near the intersection of Interstate 285 (SB) and Donald Lee Hollowell Parkway NW or Bankhead Hwy (US 278).  Between I-285 and Buckhead.

His body was missing all his clothes but his underwear (red shorts?).  A phone number in Jimmy Raye Payne's pocket led to an address on Kimberly Road, where Lee Gooch and Edward Hope Smith lived.  The cause of death was undetermined asphyxiation.