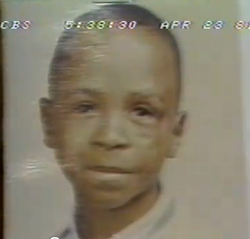 In one incident, Williams heard over his police scanner that Larry Rogers' younger brother was hit in the head with a 2x4.  He beat police to the scene and took him to the hospital.  In another incident, he hid the boy and his foster brother by the name of Gonzales in an apartment on Simpson Street, then took their mother to the location to meet them.

Larry Rogers was either last seen  at Simpson Road NW & W. Lake Avenue NW, 01 April 1981 or getting into a faded green Chevy station-wagon with a light-skinned man the afternoon of Monday 30 March 1981.  Nellie Trammell testified this was Wayne Williams.  She said she was a member of the True Light Baptist Church (across the street from Williams' residence).  The pastor denied ever seeing her there.

He was last seen wearing red and white tennis shoes with jeans and a windbreaker.

Larry Rogers' body was found by the police in the kitchen of the ground floor apartment 17 in 460 Temple St (in a block of abandoned buildings) near the bottom of a hill by the intersection of Neal Pl.

A green four-door Buick Skylark, missing its tires, that had been stolen from a Northside apartment March 28 was found in front of the building Rogers was found in.

Dog hairs were found on the body.  The body was wearing white swim trunks under blue jogging shorts with a blue shirt stuffed into his trunks.  The cause of death listed was asphyxiation by strangulation.

Police called this another "pattern case." 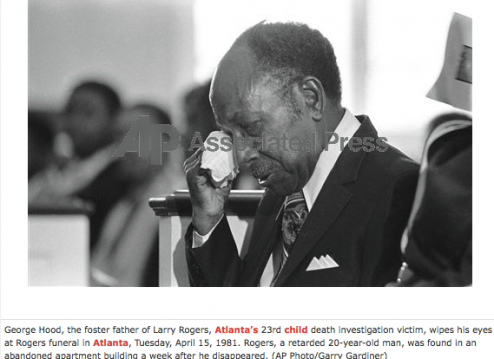