21 year old Eddie Lamar "Bubba" Duncan, Jr. (5'9" 140lbs) lived in a red brick apartment at 194 (184?) Hunnicutt St. NW, Apt. 172 in Techwood with his mother, Betty J. Duncan.  His father, Eddie Lee Duncan, Sr., who did not live with him, claimed Eddie knew Timothy Hill.  His siblings were Gloria, Gail, Sarah and Ricky Duncan.  Grandmother Sarah Lee Beech lived in Cascade Heights.  His grandfather was Thomas H. Beech and he had a niece, Little Qiana Salena (Kim) Duncan.  He was friends with Pat Man and worked in a small grocery at the edge of Techwood, as well as odd jobs at a barber shop and next door at Courtney's Games and Things, owned by Willie Joe Terrell.  Duncan was once sentenced to a year in jail for being caught carrying boxes of stolen items. 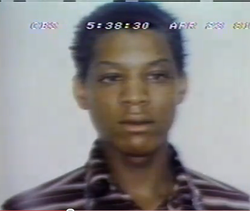 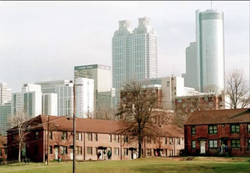 Techwood Homes
On the day of his disappearance, Eddie Duncan got onto a MARTA bus at 2 pm to drop some drycleaning off for 38 year old Calvin Coleman, who was to meet him afterwards at Courtney's, but the records show he didn't drop off the clothes until nearly 6 pm, and never showed up to meet Coleman.  He also never met with his girlfriend Racine Clements that day.  Earl Mallory, who knew Duncan through Courtney's, said he saw Duncan around 7 pm walking towards his apartment saying "I've got $20 and we're going to play some pool tonight when I get back."  His brother, Ricky Duncan, 18, heard that Eddie said he was going to help someone move to South Carolina for $200, while walking to the Varsity.  Police believed there was some truth in this.  A fifteen year old neighbor said Duncan told him around 10 pm that he was getting the $200 for helping someone paint.

Duncan was the first victim to disappear after Larry Hill, a.k.a. Larry Marshall, was arrested.  From now on, all the list victims were 17 and older. 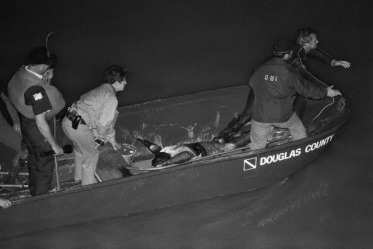 The body of Eddie Duncan was found by more canoeists on the Douglas County side of the Chattahoochie at the GA-92 (GA-166?) bridge a few feet from where Timothy Hill was found 24 hours earlier, near Fulton's southern boundary.  These two were the only bodies in the Chattahoochie found in this area.  All other bodies recovered from the river were found in the NW section of town.

The body was missing all his clothes but his boxers.  The cause of death was undetermined. 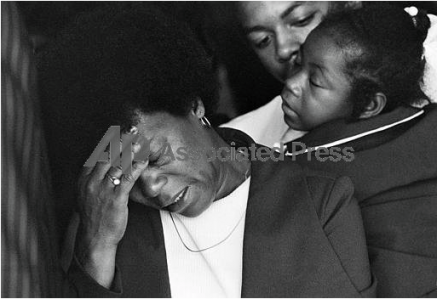 Betty Duncan
The funeral was held Saturday at 11 a.m. from Gordon Forrest Chapel with Rev. Terry Moncrief (of the Baptist Center in Techwood) officiating and interment at Greenwood Cemetery, and the cortege at 10 am.  Herschel Thornton Mortuary, 8346 M.L.King Jr. Dr. S.W.