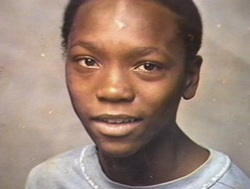 13 year old Timothy Lyndale Hill (5'3", 95lbs, DOB 01 Jan 1968) lived at 978 Sells Ave SW with family including mother Annie and sisters Mary Moses and Brenda E., and brothers Marlon Owens, and Richard Hill, Jr., 22 (26?), a maintenance man at Thomasville Heights, who was friends with Patrick Rogers.  Timothy was friends with Jo Jo, knew Baltazar, Anthony Carter, and maybe Evans and Mathis.  He had relatives that lived across the street from Middlebrooks. 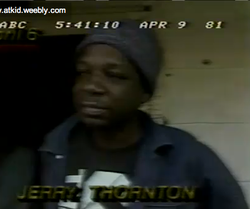 Is this Frankie Mealing?
On Wednesday, March 11th, he left his backyard where he was playing with a niece.  She said he left in a taxi, where a man put "mud" on his face.  Witness Frankie Mealing, 34, said he had sex with Timmy and another boy in a now razed house owned by pedophile Thomas "Uncle Tom" Terrell, 63, at 530 Gray Street on Thursday at 5pm.  (A neighbor of Tom Terrell said that the man kept a bucket of some kind of drug that looked like mud and that people would sniff to get high.)  Then Mealing said he went to Terrell's residence next door at 522 Gray Street.  At 9pm, Timmy came over and asked to stay the night.  After he told Tom that the last bus had left, Tom said alright.  He stayed the night with Tom, Frankie, and "Curly."  On Friday 4pm, he was seen standing on the sidewalk talking to a 16 year old girl.  Frankie claimed that he saw atleast 10 list victims at either house of Tom Terrell's.  Friday 13 March 1981

The Sunday afternoon after, he was reportedly seen at a rally for Missing & Murdered Children at Morehouse College (by a stranger who saw his red baseball cap).  The next Monday, his teacher Theresa Swindall received 2 calls (traced to Northern DeKalb County) from him, crying.

Frankie Mealing's sister, whom he was staying with, said the police questioned Jo Jo Bell on Timothy Hill's disappearance 11 days after Jo Jo was reported missing.

Frankie Mealing's roommate on Rock Street, Larry Hill (went by the names Larry Marshall and Lee Hill, mother was Bertha Hill), 34 (or 28?) year old security guard at a telephone company near East Lake Meadows and at a Salvation Army, had a son also named Timothy Hill.  When he was arrested in Connecticut, he told authorities that the victim Timmy Hill delivered a note to his residence which told him to leave Atlanta and was signed "Rev. E.C."  (Reverend Earl Carroll lived near "Uncle Tom" Terrell.)  After the arrest in Connecticut, he was held in Atlanta on charges of criminal attempt to commit armed robbery against a Fred Smith.  He claimed he had "something to tell" Lewis R. Slaton.

A 15 year old who knew Yusuf Bell said Larry Marshall took him and Timmy Hill to have sex at Gray Street on 9 March 1981.  He said he also took them to the Salvation Army to steal, but Timmy came out crying that someone had anally raped him inside.  This 15 year old last saw Timmy when he went to wash a woman's dog for $50.  He reportedly encouraged homosexual relations to another witness who lived on Kimberly Road.  This witness said another suspect (not Williams) told him Timmy Hill and other bodies would be found in the Chattahoochie.